Some days ago, I visited a very nice museum in Pistoia. In occasion of Pistoia Blues 2015, the Flavio Camorani’s Fender collection has been shown in the so-called “Fender Vintage Museum”. The museum contained all the guitar and amplifier models produced in the golden age of Fender, that is from 1951 to 1974. Indeed, during these years, the Fender company was under the guidance of the founder Leo Fender, who sold the Fender Musical Instruments to Columbia Broadcasting System (CBS) in 1974.

You can see the full collection here. It includes an impressive collection of Fender Stratocaster Sunburst year by year, from the first one in 1954 to the last one in 1974. For some older models, there is even the name of the girl or guy was working on the guitar. 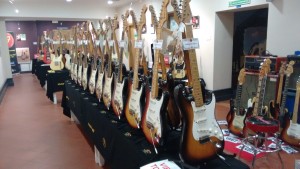 In the same web site you can also read the interesting story of Marshall amplifiers.